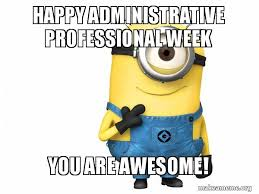 This week, Baseline celebrates National Administrative Professionals Week, recognizing the professionals who keep our offices running smoothly every day. Celebrate these professionals on the last full week in April of each year. While Baseline doesn’t have secretaries, this week recognizes the work of our admin team, which includes a variety of talents: office managers, HR, marketing, business development, accounting, and leadership.

The day in the life of an administrative professional is varied from moment to moment. While organization is key to their success, their flexibility and ability to handle the unexpected make them valuable to any business. At Baseline, the admin team is responsible for a host of different roles: invoicing, accounts receivable, ordering office supplies and snacks, safety equipment and vehicles, IT, software/hardware, employer/employee law, benefits, recruiting, winning work, selling services, training, keeping the company fiscally viable, and much, much more. They are central to an office or business running efficiently. This week, we show our appreciation for all their different positions and the strengths they bring to the Baseline team and successes.

History of Secretaries and Administrative Assistants

Secretaries and administrative assistance have always been vital to business and government. Although most people associate the word with women in the 20th century, it actually goes back much further than that. 500 BC is our first known instance of an administrative position. These were men in ancient Egypt who were scribes that were trusted with private and secret matters. This position continued into the Roman Empire and is where the term secretary originates. It comes from the Latin word secretum which means secret as they were the ones trusted with important tasks and legislation. They chiseled business transaction details and other correspondence into stone which seems just slightly more difficult than typing. As the profession developed during the dark ages, it was mostly clergy men who were keeping records about history and other things.

This shifted in medieval times when the secretary position became one of the highest a lay person could hold. There was usually a whole office dedicated to record keeping and charter documents. This office was headed by a Chancellor, who was in charge of the office and was staffed by professional secretaries. The position Lord Chancellor of England was the highest office a non-royal could hold in the government of England with one of the most famous being Sir Thomas Moore. As we moved into the modern period, the secretary positon became more of a business position in being in charge of paperwork, calculations, telephone, and typewriter.

The profession became dominated by women in the early part of the 20th century because it was an opening to the workforce and professional status and pay that men enjoyed. After World War II, more jobs were open to women which led to a secretary crisis. Although more women were working than in previous decades, they were less inclined to choose repetitive secretary work. This shortage led to an increase in pay and benefits offerings to try and attract qualified women for the jobs. The National Secretary Association pushed for training to include higher level skill such as accounting to help its members use their positions to get into management. As computers became office mainstays, the position of secretary gave way to the office administrative professional as the work became more varied. This position is closer to the original secretary handling records, contracts, sensitive information, and sometimes office finances. This week marks the 68th anniversary of Administrative Professionals week and Baseline is excited to celebrate the people that make our business possible!

National Administrative Professionals Week, celebrated annually during the last week of April, to acknowledge the services performed by this group. This year’s event takes place April 20-24, 2020. In honor of National Administrative Professionals Week and the important role our admins have played in our firm’s success, we recently sat down with members of our admin staff to learn more about their profession/role at Baseline.

Baseline’s admin team were asked to reflect upon their professional experiences, and answer questions in our “Survey the Admins.” Check out what our admins had to say each day this week for their survey responses. To kickoff the week, we feature Matt Tyburski, our chief operating officer and chief financial officer!