According to the latest statistics, there are only 13% of women working in the surveying field and 27% of land surveying students are female. Compared to 1980s that showed a 3% female participation, the progress made in diversifying the profession in nearly three decades is clear, we are seeing an increase in women studying and entering land surveying as their chosen profession. While all our surveyors are amazing individuals, Baseline embraces change and has its first woman surveyor, Danielle Bustos, who shares her thoughts of the evolving industry.

Can you please provide some insight on what it’s like to be a female in the survey profession? “In a mostly male dominant profession, I am proud to be among the few females that have chosen to work as a surveyor. I was the only female in my graduating class. None the less, it was a class of two, so I guess statistic wise, 50% is not too bad! I’ve always thought outside the box and I’m glad, on occasion, I get to work outside of it as well. My age and gender have sometimes presented a threshold when it comes to getting the job done. I’ve showed up to jobs before only to be asked where the surveyor is. When I let them know they are speaking to the surveyor, I often gotten the response, “But you’re a girl?” I thank them for the observation and then kindly let them know that I am off to collect data. I’ve also been applauded for being a female and getting the job done. I like those types of run-ins far more because I too, can carry a metal detector, shovel, pick, 24-inch extension rod, bag full of rebar and caps, and proceed to climb up a hillside. I might not be able to flip a manhole lid with ease, but at least I don’t exclude myself from trying just because I’m a female. Given some more time and conditioning, I know I will be able to flip them safely.”

As a woman, is it awkward to join a predominantly male line of work? “I personally don’t find it awkward but some males I work alongside might because they don’t know my background and what I’m capable of accomplishing. I was a combat engineer who operated a D7 bulldozer along with multiple other pieces of equipment and during convoys when we would haul our equipment; I was also a gun-truck driver, another very male dominant field. But if you have the will, you will find a way. And though respect may not be initially given, it most definitely is always worth earning.”

Do you think that more women should join the world of surveying? “I do believe that more women should explore the idea of surveying. If you are a woman who loves the outdoors, hiking, and traveling, surveying might be of interest to you. If you love history, try digging into some research of original surveys. BLM filed notes are my favorite history books. If you love the city life, see what types of comprehensive plans are out there and see how you might fit into the photo of making those plans come to life in future years. It is very rewarding to be a part of the process to help your community. I’ve staked out a handful of health clinics in rural northern New Mexico and to know that they couldn’t have been built without my staking the corners, curb and gutter, and retention ponds, is quite fulfilling.”

Have you ever worked with other females in your profession? “I had the privilege of having a mentor in southern New Mexico, Roxanne Nimmer, PS. She was also the owner of Del Sur Surveying LLC, in Mesilla Park, NM. I was able to do a lot of agricultural work with her in Las Cruces and in the surrounding areas. She is the one that assigned me to do the aerial control for the USDA. She taught me a lot and I am forever grateful for the summers I spent under her supervision while studying at New Mexico State University.”

Do you have any suggestions on how the profession can attract more women? “I’ve always wanted to get to the point in my career where I can do some outreach. People know little more about surveying other than, “You are the one on the side of the road looking through that thing, right?” Short answer is, “Yes.” But there is so much more to it than that. Getting young minds involved is key right now. Not only are they up-to-date with technology and can keep up with the industry, surveying is also a dying breed and it’s time that women start digging their hands into the soil and planting some roots in a ground that has been cultivated by men for so many years. Imagine Mount Rushmore who has three surveyors on it, with a females face? That would be a site to be seen! Females have always had these imaginary boundaries of professions to fit into. I’ve always made bigger waves going against the grain of the wood and I don’t plan on stopping any time soon. I hope to influence at least one other female to give surveying a shot.” 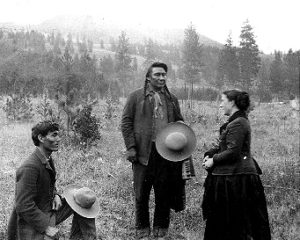 The first documented American woman surveyor was Alice Cunningham Fletcher. Alice was educated at the Brooklyn Female Academy and was also active in temperance, anti-tobacco, and the feminist movements at the time. To support herself, she became a public lecturer and then went into anthropology and worked with Frederic W. Putnam, who was the director of the Peabody Museum of Archaeology and Ethnology in Cambridge, Massachusetts. While in Massachusetts, Alice befriended two contemporary Native American women who were from the Omaha tribe. The women were on a speaking tour with Ponca Chief Standing Bear, to garner support to reform the reservation system. She quickly took up their cause to help reform the reservation system and give Native Americans land titles.

She lobbied in Washington for the passage of a special act, which allowed the division of the Omaha Reservation into individual allotments of land. When the Omaha allotment act was passed in 1882, she was sent by the Bureau of Indian Affairs to Nebraska to implement it — this experience was the start of her surveying career!

By 1884, she had allotted 75,931 acres in 954 allotments to 1,194 Omaha people. Her work was so thorough that the Bureau hired her to create a nationwide survey of all the Indian reservations, their histories, current situations, and the educational facilities available on each for helping the Indians toward “civilization.” Once completed, Alice was recognized as one of the foremost authorities on Indians in the country.

Alice became good friends with Chief Joseph of the Nez Perce and was beloved by the tribe. The Native Americans knew her as the “Measuring Woman.” When the work on the Nez Perce Reservation was completed, she had allotted and surveyed 179,000 acres of land! Throughout the rest of her life, she continued to work for Native American causes and document their ways as an anthropologist. Alice Cunningham Fletcher passed away on August 23, 1923 from a stroke. At that time, she was working at the Bureau of American Ethnology in Santa Fe, New Mexico.