The North and South Roundabout project is for the Town of Erie, which will connect the new planned town center at Erie Pkwy and County Line Rd. The project is being constructed in two parts: a roundabout north of Erie Pkwy at Maxwell Ave., and another to the south of Erie Pkwy at Austin Ave. The northern roundabout will be constructed first and was the first to have subsurface utilities engineering (SUE) completed for the project. SUE is required by State Senate Bill 18-167 which follows the guidelines from ASCE 38-02 to locate existing utilities within a project that is improving or installing any gravity-fed system for any local municipality, state, or federal project in Colorado.

The north roundabout was not as complicated as the south in terms of what utilities existed. They were easily located and surveyed. The challenge was that much of it was large oil & gas, large fiber duct, and high-pressure gas main. This required 28 (Quality Level -A) QL-A locates, which is when the gravity system crosses the existing utility, the utility must be physically identified. This is completed by a hydrovac truck that uses high pressure water to dig a hole in order not to damage the utility.

Baseline oversaw the location and hydrovac operations and successfully found all the required utilities. We then process the reports given by the locator and transferred into the SUE Testhole Log which details the size, material, and depth of the utility, along with the plans in which location is identified. This helped the Town of Erie coordinate with the stakeholders and narrowed down how much right-of-way and easement access they would need as well as avoid conflicts that would have happened in the field.

Lastly, SUE also helped avoid a future project conflict (that was proposed separately from Baseline), in which CDOT was installing fiber and would have directly impacted this project if SUE hadn’t been completed and the conflict resolved. 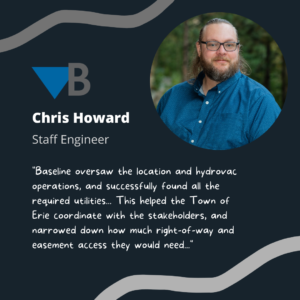