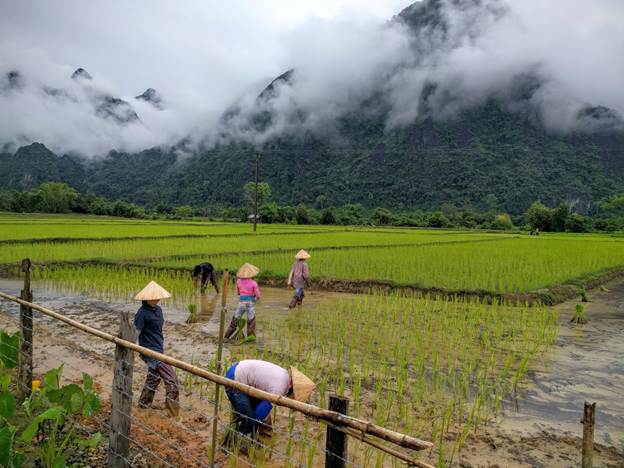 Here’s the second snapshot of a Baseline employee sabbatical. (The first snapshot was of our Business Development Manager, Rick Behning’s trip to Morocco.) During the eighth year of work (after working seven full, consecutive years), our full-time civil engineers, land surveyors, community planners and water/wastewater engineers are eligible for paid sabbaticals. This benefit includes 22 consecutive business days off plus approval on a discretionary bonus up to $2,000. The bonus can be applied to flight, lodging and other approved trip expenses.

Sabbatical Destination: Southeast Asia with an emphasis on Thailand, Laos and Vietnam

Unique Point: “Our group was off to Luang Prabang, Laos. It was where we were first introduced to Laotian food with chicken feet in our soup.”

Field Report: I chose to use my sabbatical to explore Southeast Asia. Specifically I visited Thailand, Laos, and Vietnam with a bonus eight hour layover in Tokyo on my return trip home. The first half of the trip was spent in Thailand with a great group of friends. We picked it as our destination because we heard it’s inexpensive, has great beaches and friendly people, and of course, delicious food. Before almost getting flung from the elephant

We were not disappointed on all accounts. We started out in Bangkok, which is a big bustling city. Then, we ventured to the more laid back Chiang Mai in the north where we visited an elephant sanctuary. I almost got flung from the elephant I was riding. It was trying to protect its baby from sliding down a muddy hill. Luckily, I was able to hang on. To say the least, I was a little on edge the rest of the ride.

The next activity was a wonderful cooking class. We learned to make six different dishes. Our instructor told us to try the traditional northern Thai dish khow suey, noodles with a delicately spiced coconut milk sauce. It was the best meal of the trip. We then headed south to the Krabi for some beach time. The highlight was getting $10 massages on the beach three days in a row! It was fun to be at the beach and discover our favorite bar/restaurant of the trip, the Sunset Bar. It didn’t take long to figure out how it got its name–the sunsets were amazing!

Next, our group was off to Luang Prabang, Laos. It was where we were first introduced to Laotian food with chicken feet in our soup and duck so rubbery we deemed it inedible. Suffice it to say Thai food was better than Laotian food. We rented some mopeds, and took the hour-long ride to Kuang Si Waterfall. It had five or six light-blue, natural pools. You could swim in them until your heart’s content.

We also took a sunset boat ride on the Mekong River. It was nice and relaxing. Next on the agenda was a four-hour mini bus ride south to Vang Vieng. It had the best scenery of the whole trip. It’s surrounded by gorgeous mountains with low hanging clouds and the adjacent rice fields were a vibrant green. There is also a significant river that runs through it.

We took a bike tour one day and a kayak tour the next. We also went into a water cave in inner tubes. Our trip continued south to Vientiane, the capital of Laos. We found a great ex-pat bar and felt right at home.

We finished the trip by heading to Hanoi, Vietnam. I was introduced to my new favorite Vietnamese dish, bun cha. It’s grilled pork and noodles served. In May, President Obama and Anthony Bourdain visited a small restaurant where all they served was this dish. The Parts Unknown episode will be airing sometime this fall. Hanoi is a very busy town with the most insane traffic.

The many cruise ships in Ha Long Bay

The highlight of Hanoi was taking a 35-mile bicycle tour to the outskirts to a pottery village and around West Lake. We then headed to Ha Long Bay for a three-day, two-night boat cruise. The scenery was breathtaking. I can see why this area is such a tourist attraction. After the cruise, we headed south to Da Nang in central Vietnam with some of the most beautiful beaches and cool bridges.

On the way home, I spent an extended layover in Tokyo with a friend who is from there. He used to live in Denver. We got to see a temple, eat some unagi (eel) and catch up. It was good to be back in Japan. It made me want to go back again. Maybe in 2020 for my next sabbatical. Then, I can check seeing the Olympics off my bucket list!