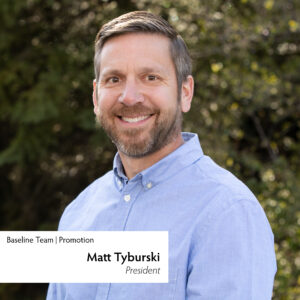 Matt Tyburski, Chief Financial and Operating Officer (CFO/COO) for the past seven years, has been promoted to President of Baseline. As he reflects on his time working here, he shows gratitude for his CFO/COO role. He loved that every day was filled with a variety of people from all different parts of the industry; whether he was discussing equipment with the on-site workers, negotiating a contract, or setting strategy for the company overall, he is thankful that this experience brought him close to every single employee at the company. Matt is passionate about supporting the team members though any means necessary—from delivering proposals to providing lunches. He acknowledges that the team is the priority and driving force that continually moves Baseline towards new levels of excellence. Simply put, he believes that Baseline is an incredible company built by and for the employees and finds fulfillment out of working for an organization that he so strongly cares about. 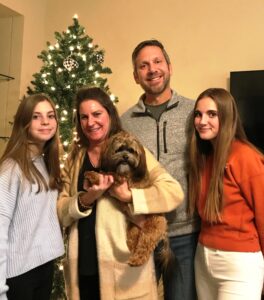 Upon further reflection, Matt highlights how his past has led him to his present. He attended LaSalle University in Philadelphia (Pat’s not Geno’s) where he graduated with an accounting degree and then proceeded to land his first full-time job with a previously categorized “Big 5” firm, Arthur Andersen. Matt’s father, a successful tax attorney and CPA, inspired Matt to pursue this career as an accountant but also to work for a diverse range of companies. His roots are in central Jersey in which he reminisces on the pizza (Central Pizzeria), bagels (Bagel Garden), the city (if you don’t know which one, sorry), and the shore (LBI). Even so, he admits that he wouldn’t want to live anywhere other than Colorado since relocating here in 2001. Currently, Matt and the family Shi Tzu, Ollie, are outnumbered by girls in the household which include his wife Lauren, and two daughters ages 13 and 15. In his free time, Matt enjoys staying active and being outdoors whether that’s through running, snowboarding, or golfing.

Unique experiences and knowledgeable mentors have helped shape Matt’s work ethic and career; each one has reinforced that hard work, availability, dedication, and treating people with respect wins in all settings. One of Matt’s more recent mentors and partners, John McLain, Baseline’s founder and CEO, has served this same purpose. Matt cherishes his time spent with John and admires the standards and expectations that he has set for the company. When Matt first started working for Baseline, he told John that he had always dreamt of one day running a company; ever since, John has helped make that dream a reality by generously offering opportunities. Matt is forever grateful for this as he emphasizes that all you can ask of someone is to give you a chance to prove yourself.

When looking ahead, Matt expresses his excitement for new challenges and stepping outside of his comfort zone—encouraging a lot of development and growth. Matt notes that changing positions is not about choosing one thing over another, but simply moving onto the next phase of his career; he feels extremely fortunate to be able to do that at the same company. Equally, Baseline appreciates all that Matt has accomplished over the years and with him at the helm in his new role, the possibilities are endless!