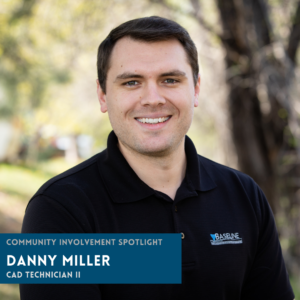 The team won the 3A State Championship on May 13th, 2021 at the Broadmoor World Area in Colorado Springs. They went undefeated this season with a remarkable 18-0 record and are ranked 2nd in the State and 33rd in the NATION! This is their 7th Championship in a decade. Eaton played against Sterling, last year’s State Champions and conference opponent, in the championship match. Eaton won in 4 sets: 25-14, 23-25, 25-20, 25-22.

Danny has played in recreation volleyball leagues for many years. Over the last few years, his wife, Chelsea, convinced him to coach with her. He has coached a club team at Eaton Volleyball Academy for the last three years. This year, he assisted the high school team alongside Chelsea, as assistant coaches to the varsity team. Outside of varsity, Chelsea is the head coach of junior varsity, while Danny took the lead of two C teams.

Baseline admires Danny’s commitment to his community in his free time to help support young adult’s extracurricular sports. We congratulate Danny, Chelsea, the Eaton High School volleyball team, and team members who worked so hard for this big victory!