Planning Story of the Day 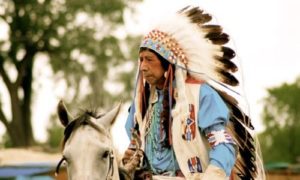 “As planners, we are routinely asked to facilitate neighborhood meetings. Development proposals are presented to neighboring property owners to inform and to identify potential compatibility concerns. We are particularly adept at active listening, and creative problem-solving whenever we can. On one occasion, at particularly well-attended neighborhood meeting for a housing development, a group of Native Americans attended. They were dressed in full Native American Headdress! Their passion for their earth, their ancestors, their culture was breathtaking – and very effective. As planners, we are trained to research potential impacts or influences for the projects we represent. Every project takes on a life of its own, and no two projects are the same. This is what makes community planning so exciting. In this case, the meeting led to researching the historic and cultural resources in the area (something not done routinely). We found that there were, in fact, artifacts at the site. We worked with the Colorado Historic Society to make sure the resources were carefully preserved before the plans were eventually approved and construction could begin.” — Deanne Frederickson, RLA, Business Development Manager and former Senior Planner

John Nash was a British architect during the regency period of England who is responsible for many of the iconic architecture styles seen in London today. He designed a majority of the layout of London at the beginning of the 18th century. Under the patronage of George IV, he designed many of Britain’s most famous buildings including the Royal Pavilion and Buckingham Palace.

Georges-Eugene, Baron Haussman was an urban planner who is largely responsible for the modern view of Paris. Under Emperor Napoleon III, in the 19th century, he transformed medieval Paris into what we think of today. He introduced the broad boulevards and grid-like mapping completely replacing the old medieval quarters. It was during this time that the classic white townhouse blocks with the iconic sloping roofs began to take over. He introduced parks and squares as well as new sewer and gas lines modernizing Paris as if overnight.

This week we celebrate our community planners and reflect upon their experience as planners through our “Survey the Planners.” Check out what our planners had to say each day this week for their responses.

“Most people don’t really know what planners do, and many feel like planners restrict landowners’ rights.” — Julie Esterl, Associate Planner

“The main challenge in planning is that everyone has a different idea about what the “right” plan is. At any point, your client, boss, property owner, nearby residents, public officials, or stakeholders may have different opinions which can get very contentious. A good planner knows how to educate and communicate with these different agencies and come to an agreeable solution.” — Andrew Baker, Associate Planner

“When the economy and land development are doing well, planners are on the frontline of the backlash against growth. The ideal planning solution is almost never achieved – be prepared to compromise.” — Ben Thurston, AICP, Senior Planner

“Facing the NIMBYs” – the ‘Not In My Back Yard’ mentality perspective.” — Vince Harris, AICP, Director of Planning