During the eighth year of work (after working seven full, consecutive years), our full-time civil engineers, land surveyors, community planners, and water/wastewater engineers are eligible for paid sabbaticals. This benefit includes 22 consecutive business days off plus approval on a discretionary bonus up to $2,000. The bonus can be applied to flight, lodging, and other approved trip expenses. In June/July, Noah Nemmers spent most of his sabbatical touring New England. Here’s Noah’s sabbatical journey.

Unique Point: Cooperstown, New York. I had always wanted to make the pilgrimage to Cooperstown to pay homage to the heroes of the National Baseball Hall of Fame and Museum and this was obviously my best chance. GO CUBS!

Field Report: The pieces came together for my first Baseline sabbatical. We planned a magnificent three-week family vacation in New England. In the weeks prior, we worked on a puzzle at home as a family so my two girls Claire (10) and Leah (8) could begin to get excited about our trip and the places we would see. We had planned our route and booked our lodging along the way. Eleven stops in all—starting in New York City and ending in Philadelphia. 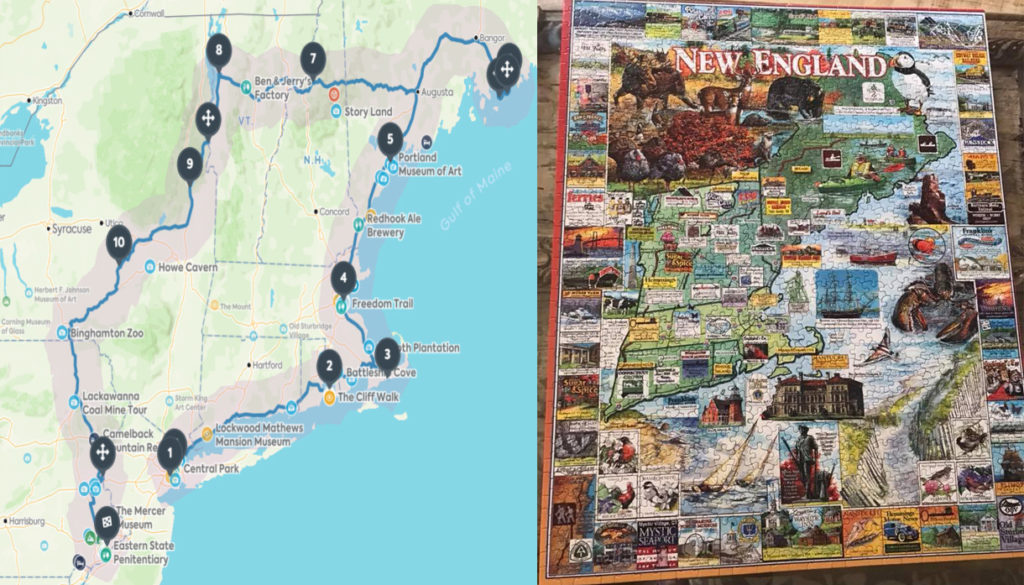 Stop 1 – New York City, NY: We started our journey in New York City, flying into LaGuardia and spending three nights in Battery Park. We were able to climb to the top of the Statue of Liberty on our first day. The climb itself is a little strenuous for most people–354 steps, equivalent to 20 stories–up a narrow spiral staircase. Fortunately, we had a few more red blood cells and a little more lung capacity having just flown from Denver. Other stops in New York included a day riding bikes through Central Park, a stop in Times Square, the Financial District, and the 9/11 memorial site. The memorial is incredibly well done. The amount of thought that went into this memorial is astonishing with areas for reflection, grieving, and celebrating the heroes that gave their lives that day to save others. My children were obviously born well after the tragedy so they learned through the memorial site and museum what happened that day and something I’m sure they will never forget.

Stop 2 – Newport, RI: We rented a car that would be our main mode of transportation for the next few weeks and left New York City. Our next stop and overnight stay was Newport Rode Island. My girls were mostly excited to get to a beach so that was priority #1.

Newport had a yacht-filled harbor and is famous for hosting America’s Cup, the renowned sailing race, for many years. We went for a walk along the cliffs and saw many beautiful mansions dating back to late 1800s, many of which are now museums.

Stop 3 – Cape Cod, MA: Cape Cod was our next stop where we rented a beach house in Hyannis. We spent a few days there at the beach, whale watching, eating seafood, and just relaxing. On our last day there, we drove out to Provincetown at the tip of Cape Cod. There is a 250-ft monument that we climbed that was built to commemorate the first landfall of the Pilgrims in 1620, and the signing of the Mayflower Compact in Provincetown Harbor.

Stop 5 – Boothsbay Harbor, ME: On our way north, along the Maine coast, we were very delighted to stumble upon Boothsbay Harbor, Maine. We just happened to be there the weekend of Windjammer Days, which is their event to kickoff the start of summer. The weekend event included an antique boat parade, local artists, waterfront concerts, pirates, kid’s crafts, and a pirate ship cannon battle. Wish we could have stayed longer, but it was on to Bar Harbor.

Stop 6 – Bar Harbor, ME: Bar Harbor, Maine and Acadia National Park provided beautiful scenery, tide pools, and hiking that required some ladder climbing; however, the kids didn’t seem to mind. One of our hikes included a hike out to an island that was only accessible on foot during low tide.

Stop 7 – New Hampshire’s White Mountains: We left the coast and headed inland to New Hampshire’s White Mountains where we took in the sights and stayed at the historic Mountain View Grand Resort. Many former US presidents have enjoyed the beauty of the resort, including: Theodore Roosevelt, Grover Cleveland, Warren G. Harding, Calvin Coolidge, Franklin Delano Roosevelt, Dwight D. Eisenhower, and Richard Nixon. With all you can eat s’mores, it’s no surprise why.

Stop 8 – Burlington, VT: This next stop in Burlington, Vermont was all about ice cream and teddy bears. I could have done without the latter but it made for some happy family and added a couple more furry companions to the journey.

Stop 9 – Lake George, NY: One of the highlights for the entire family was our two days in Lake George, New York, which included a day on the lake in a speedboat that we rented. It was a great way to beat the summer heat and the lake itself was absolutely clear and had beautiful scenery.

Stop 10 Cooperstown, NY: One of the highlights for dad was Cooperstown, New York. I had always wanted to make the pilgrimage to Cooperstown to pay homage to the heroes of the National Baseball Hall of Fame and Museum and this was obviously my best chance. The girls got into it by filling out quiz questions as we went through the exhibits and were rewarded with baseball cards that they started trading the moment they opened the package. GO CUBS!

Stop 11 – Philadelphia, PA: Philadelphia, Pennsylvania was the last stop on our trip where we met up with my wife’s family for the last few days of our road trip. We visited the historic sites in Philly including Independence Hall and the Liberty Bell. On the 4th of July, we went to a Phillies game at Citizens Bank Park and toasted to a great vacation. The kids’ journey wasn’t quite done yet as grandpa then took them with him back to Indiana for some more beach time in Lake Michigan. My wife would fly back and get them the following week.

My last week was spent at home treehouse building. I got a permit and everything! I pretty much maxed out the height at 14 ft and made it as big as the code would allow without needing a full-blown inspection meeting International Building Code. This may not seem like a calming way to spend my last week, but it was for me. The girls were very pleased by the surprise when they got home and have spent nearly every day since in their new fort.