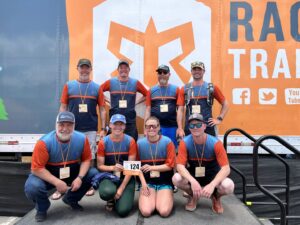 Baseline sent a running team to compete in this year’s Ragnar Trail Colorado in Snowmass Village over a three-day weekend, June 9-11. This high-country adventure was filled with laughs, stories, fun, and most of all, running! The Ragnar Trail Colorado consists of three loops of varying distance and difficulty over a combined total of 15.1 miles. A team of eight runners must each run each loop where runners run continuously over the two-day period until everyone on the team completes all three loops. The race support local charities within the communities they run: First Descents, Big City Mountaineers, and Team Red, White & Blue. 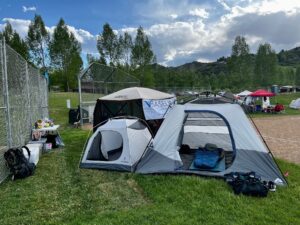 Once our roster was filled, months of training began for the team. Multiple team-building runs and meetings were led out of our Golden office for members eager for the challenge. The Baseline team this year started out as a full company team; however, due to a few unforeseen circumstances, two substitutes had to fill in at the last week leading up to the race. Despite the last-minute changes, the team was prepared and ready to go. The majority of team members rode up to the venue on Thursday afternoon to setup camp and spend the evening preparing for the race the next morning. The team made personal pizzas in a camping pizza oven, which were a huge hit! 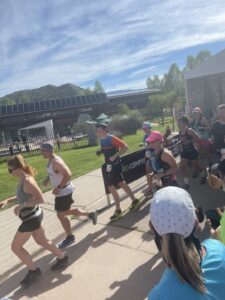 The next morning, our frontrunner, Alan Lunsford, kicked off the first loop starting at 9am while the rest of the team prepared for their incoming runs. Once the race started, the individual challenges of balancing sleep, food, and recovery for the next run began. The weather during the first day of racing was beautiful, despite the heat in the afternoon which posed another challenge for members running during that time frame. Once everyone finished their first loops during the day, the nighttime runs were approaching. The night runs pose a number of additional challenges, most people don’t usually wake up at 2am to go run a few miles of trail in the middle of the night!

Team captain, Sean Callahan, had this to say, “As the sun started to rise in the morning, the Baseline team members started finishing their third and final loops. It’s truly an amazing experience to finish yourself, and watch your teammates push through the last 100 yds to complete the challenge. Part of the amazing experience on the final loop could be knowing that you don’t have to run another. As the final runner came around the last corner, the team rounded up to run under the Ragnar arch together and finish as a team! 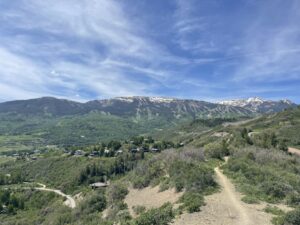 I can’t speak for everybody, but I know that we all had an amazing time accomplishing something only a handful of other people are willing to do. The camaraderie built between team members, stories told, beautiful country, and lack of sleep all lead to an unforgettable experience for everyone involved. It’s a bittersweet feeling when the race is over every year. I really believe that this is one of the most rewarding experiences you can sign up for.”