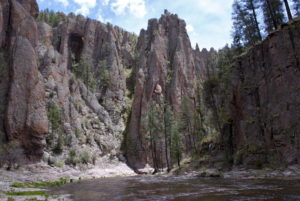 “In 2018, I helped set aerial control in the Gila National Forest, New Mexico. Camping out for three days, we traveled by foot and ATV to several mountain tops and laid out panel points and recorded our observations to send into OPUS for a solution. After control was established, the site was flown using a fixed wing aircraft which collected LiDAR data in order to help calculate the cubic yards of tailings that past lead and zinc mining had left behind. The USDA Forest Service needed the data to perform an environmental cleanup. They wanted to remove the waste and help protect not only the animals that call the National Wildlife Refuge home, but the additional surrounding environment and persons. Since 2019, the operation has been in motion removing 90,000 cubic yards of waste which was leftover. Cleanup is expected to be finished in the spring of 2020. I saw so many cool artifacts from the mine and wildlife in the area. It feels great knowing that I had a small piece of that pie in that process. After all, our mission should be to leave the land better than I found it.” — Danielle Bustos, Survey Crew Chief

Space, the Next Surveying Frontier

The world has been surveyed and resurveyed throughout the ages, so what’s next for surveyors? Perhaps, it’s other frontiers such as the moon or Mars. NASA has already begun charting these planets and may be looking for a few good surveyors soon. 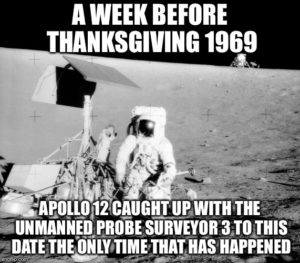 Surveyor 1 was the first in a series of seven robotic spacecraft sent to the moon to gather data in preparation of NASA’s Apollo missions in 1966. It was also the first spacecraft to make a true soft-landing on the moon.

Launched on May 30, 1966, it landed on the moon on June 2, 1966. Surveyor 1 transmitted more than 11,000 photos of the lunar surface to the Earth, using a television camera and a sophisticated radio-telemetry system. Thanks to the photos sent back, the astronauts of the Apollo missions were able to use them as a survey of the land to determine the best place to land and navigate on the moon. 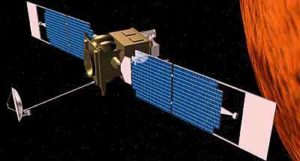 Mars Global Surveyor launched on Nov. 7, 1996, and began orbiting Mars on Sept. 11, 1997. Its mission started a primary mapping phase in April 1999. The original plan was to examine the planet for a single Mars year (nearly two Earth years). However, based on the valuable information returned by the spacecraft, NASA extended its mission four times.

The spacecraft evaluated landing sites for the twin NASA rovers that landed in 2004 and sites for future landings of the Phoenix and Mars Science Laboratory missions. It monitored atmospheric conditions during aerobraking by newer orbiters. It served as a relay link for the rovers and provided mapping information about their surroundings.

A few of the mission’s many important discoveries about Mars include:

What do you feel is the most challenging about your survey role and why?

“Working in traffic, because it’s the most dangerous thing we do as surveyors.” — Danny Tucker, Survey Crew Chief

“The most challenging aspect to my role is balancing employee development with an industry that typically wants things done as quickly and most cost-efficient as possible.” — Aaron Demo, PLS, Survey Division Manager

“Collecting best available evidence is sometimes the most challenging. Knowing that you’ve searched high and low for things that were set over 100 years ago and you have come up dry after a long day. Then downloading what evidence you did find and adjusting your calculations to go back out there and do it again. You can’t take the easy way out and disregard the monument because a lot is laying on the line –pun intended. Sometimes you dig and dig and dig some more and hopefully your metal detector doesn’t lead you down a rabbit hole. That happens. Sometimes not even a metal detector can help you. So when you find that marked stone in a forest that is overgrown, it is so rewarding! “— Danielle Bustos, Survey Crew Chief