“While surveying in New York City, the only parking space we were able to find was in the elevated parking garages they had there. This meant we needed to get all equipment and supplies needed for the day out of the truck when we park. We were not able to retrieve or access the vehicle until the end day. This presented some problems in the fact that we had no where to store the expensive equipment we weren’t using at the time, but still needed. Along with the equipment shuffling around with us throughout the day, the jobsite was along Broadway with hundreds of people walking by every hour, double-decker tourist buses obstructing views, and everyone wanted their picture taken. We ended up setting up over the subway ,so every train that would come by would slightly shake the total station and we would have to re-level.” — Aaron Demo, PLS, Survey Division Manager

A Quick History of Surveying Tools 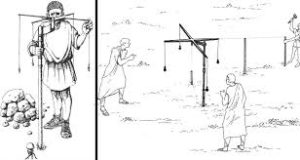 Surveying has been around since ancient times, and since 1400 BC, surveyors have been developing tools to help them accurately measure property, divide land, and mark boundaries. Our modern surveyors have it easy compared to their predecessors – they don’t have to lug chains around! The ancient Egyptians began using variations of our modern tools around 1400 BC. They recognized the need for accurate measurements for tax purposes and precise angles for their construction. Their tools included measuring ropes with knots tied at intervals, sighting instruments, and levelers. As the profession became more developed, the Mesopotamians developed the first dedicated surveying tool, called the Groma. First used in 400 BC, the Groma incorporated a long staff with a cross bar that measured right angles and strait lines. The technology spread and even Roman surveyors used this tool as the empire began to rapidly expand. Around this time, the ancient Greeks also began to develop a measuring tool. They had just developed the science of geometry and used it to divide land accurately. The diopter took terrestrial and astronomical measurements using a cogwheel, screw, and water level. Because of similarities, the diopter is recognized as the predecessor of the modern theodolite.

The Renaissance marked dramatic advancements in science and technology which led to even more precise tools. Around 1600, the practice of triangulation was discovered which made it possible to map entire countries. However, one of the biggest changes came in 1787. Jesse Ramsden was a mathematician who developed and created several tools that increased accuracy for the surveying profession. His dividing engine was the key to his success because it allowed him to manufacture other tools that produced incredibly accurate measurements. This made it possible for him to create the first theodolite that could measure angles in vertical and horizontal planes.

By the 1800s, surveyors were mainly using surveyor’s chains and compasses to create and measure boundaries. The survey chain had been developed in 1620, and was the universal form of measurement. It consisted of 100 iron links and was 66-ft long. Eighty chains make up one mile and ten square chains make up one acre. Surveyors would have to carry these chains and continue to pick them up and lay them out in order to accurately measure a property. Eventually steel measuring tapes were invented, reducing the hard labor of the surveying profession. 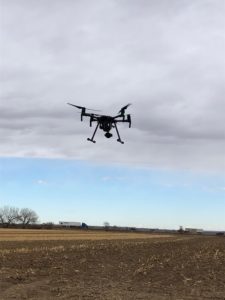 Now, modern surveyors can use Electronic Distance Meters that can measure from 2 to 20 miles – no chains or tapes necessary. In addition, the use of unmanned aerial vehicles (UAVs or drones) help measure larger land areas and masses, providing more efficiencies. Thankfully, for our clients and the surveyors, Baseline utilizes all of the modern technology we have available which allows us to provide efficient and accurate data.

National Surveyors Week, celebrated annually during the third week of March, raises awareness of the profession through education, media, and public service. Hosted by the National Society of Professional Surveyors, this year’s event takes place March 15-21, 2020.

In honor of National Surveyors Week, and the important role surveyors have played in our firm’s success, we recently sat down with members of our survey staff to learn more about the profession.

What is the most important aspect of your survey role and why?

“Accuracy and the ability to problem solve, having the mind of an intellectual, the spirit of an outdoorsman, the body of an athlete, the resourcefulness of a detective, and the soul of an artist.” — Danny Tucker, Survey Crew Chief

“Each step in surveying is important but teaching the client about the surveying process, regulations, and ordinances that affect their ownership sometimes makes all the difference. Most people don’t know they need a survey, until they need a survey. And then they don’t know why they need it. Or why they can’t use the Magic Marker sketch that Great Grandpa Peter left them which shows the barn and the house and enough land left over to build their new house. They don’t know that 75% of their land needs to stay agricultural open space, you can’t block that ingress and egress because you don’t like your neighbor unless you pay up to the current year’s taxes, you can’t divide your property. So, educating the landowner on what they can and cannot do and what you as the surveyor can and cannot do are very important.” — Danielle Bustos, Survey Crew Chief

“The most important aspect is communication between the different individuals working on the project. Working as a team to get the client their product on time and correct with multiple employees roles and responsibilities.” — Aaron Demo, PLS, Survey Division Manager