“A project in western Wyoming was kicking off at the end of February. The client assured us that most of the snow had melted and that we would be able to drive around the site and to every location we needed. For the initial journey, we brought two trucks just in case the snow was too deep in areas and we needed to pull a truck out. The drive started with a strong wind and blowing snow in Wyoming and within the first couple hours in on I80, I put the spare work truck into the median. The only time I have ever driven off the road was at the start of that trip. Little did I know that this was an omen of how this trip would go. After getting towed out of the median, we finally drove to the site and got started. Immediately driving off the main road, we encountered snow too deep to drive. So much for easy access to everything, it was time to hike. Luckily, I brought some snow shoes just in case, unfortunately, the other party chief did not, and when we encountered waist-high drifts, the struggle was real. Hauling lath, t-post, and equipment miles off the road, in my snow shoes, I would hike and haul equipment ahead, drop it off, and return to get more equipment from the other guy without snow shoes. After three days of hiking near the Wind River Range, it was apparent that we weren’t going to complete the project in the time anticipated. A couple phone calls later, we determined that we would stay onsite until it was complete. What was initially planned to be three days, turned into seven days. Ten-hour days, turned in to sun up to sundown days to complete the work. Many additional trips to the grocery store, clothing store, and drug store were needed as food, clothing, and long days were wearing on the body. While the trip was one of the toughest mentally and physically—it was also one of the most rewarding. I would like to think others would have given up.” —Aaron Demo, PLS, Survey Division Manager

No, It’s Not a Camera… So, How Does Land Surveying Work?

In our everyday lives, we use all kinds of measuring tools, such as rulers, tape measures, and protractors. For the most part, these tools are great for home projects, but what if we need to layout something bigger like a building, road, bridge, dam, or pipeline?

Surveying is the science of taking big measurements. You’ve probably seen the guys on the side of the road looking through a camera-thingy on a tripod. Basically, all civil engineering projects start with a good survey. Surveys determine the legal boundaries between parcels of property. Surveying is also used to determine the location of existing infrastructure, the topography, and the slopes of the land. People have always had a desire for building things, and surveying is a profession full of history and tradition. Behind every wonder of the ancient world was an ancient geometry nerd who laid out the angles and alignments during construction. Surveying is also how we created accurate maps of entire continents like the Great Trigonometrical Survey of India, which took almost 70 years to complete and included the heights of Mount Everest, K2, and Kanchenjunga!

The standard survey tool is called a theodolite, and it’s used to measure the horizontal and vertical angles between points. Combine those angles with distances from a chain or tape measure, and you can triangulate the location of any point using trigonometry. Theodolites today, or total stations, can measure angles AND distance, and have onboard computers to calculate and record the data for later use. When you see a surveyor peering through that camera-thingy, it’s probably a total station, and they’re probably sighting a reflector to record the location of a point. For long distances, these measurements have to be corrected for variations in earth’s gravity, refraction by the atmosphere, and even the curvature of the earth. There’s even more sophistication with modern surveying equipment such as GPS and unmanned aircraft (drones).

As noted yesterday, surveying is one of the oldest professions in the world, and also one of the most important. Why? Because land is important. If you own land, it’s probably your most valuable asset. As a career, surveying is a mix of legal knowledge, research savvy, fieldwork, math and geometry, and technical challenges. And since most civil structures are too big for our everyday measuring tools, the surveyor is one of the most important companions for the civil engineer. 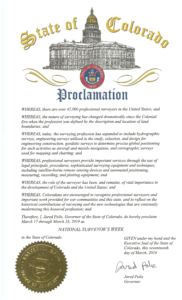 4. Why should someone consider a career as a surveyor?

“Surveying gives you the ability to work in an outdoor environment, many times in beautiful or interesting locations. Frequently, the job you work on is different each day. You also effectively act as your own “boss” while performing field work.” —Travis Winnicki, Survey Crew Chief

“Can work outdoors, travel, and challenge themselves. A profession in which you never stop learning.” —Aaron Demo, PLS, Survey Division Manager

“I would say that as a career the survey industry has something for everyone. There are jobs for office people such as research, drafting, processing data, and project management; as for people who prefer to work outdoors there are crew chief, party chief, instrument operator, and drone pilot positions. This work can range from construction staking in the city to shooting a topo in the countryside.” —Jayme Hobin, CAD Technician II

“Surveying as a career choice – The top reason would be freedom from the cubical. I get to be outside and in the middle of the action.” —Jeff Van Horn, PLS, Survey Crew Chief

“It’s a great job for someone who enjoys the outdoors and is interested in operating technical equipment.” —Doug Lancaster, LSIT, Survey Project Manager

“It is a pretty high in-demand job with a decent career ladder that also is not that difficult to get into with somewhat quick progression.” —Danny Miller, CAD Technician II

5. In your opinion, what types of skills or traits are essential to have as a surveyor?

“A positive attitude and the ability to work with others.” —Jayme Hobin, CAD Technician II