A Day in the Life as a Surveyor, with Danielle Bustos!

ABOUT DANIELLE
As National Surveyors Week comes to a close, we want to again thank Surveyors globally for their commitment to this profession and constant efforts to improve communities. Additionally, in honor of Women’s History Month this March, we would like to feature one of our surveyors, who happens to be the only female on that team. Danielle Bustos, LSIT, is the survey crew chief and one of our CAD technicians; she is greatly valued and admired by Baseline as a whole.

Danielle was born and raised in the Chile Capital of the World, New Mexico. She grew up in the beautiful valley of Española, nestled between Taos and Santa Fe. She graduated from New Mexico State University with a Bachelor of Science in Surveying Engineering and later moved to Fort Collins, Colorado. She first started working with Baseline in 2019; in her current role, as both Crew Chief and CAD Technician II, she is able to have the best of both worlds by collecting, processing, and drafting data.

Over the years, Danielle has gained a lot of experience. She has many unique stories and pieces of advice to share. Continue reading to hear her story about a day on the job spent with a rattlesnake, topped with some words of wisdom she has to share. 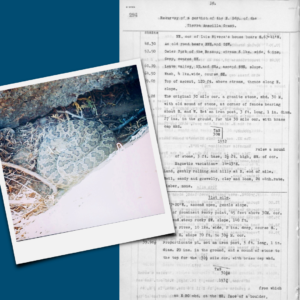 THE DIAMONDBACK RATTLESNAKE
“From the 16th century to the mid-19th, the king of Spain and the Mexican government awarded land grants to individuals and communities throughout the American Southwest. All seven of Colorado’s land grants, comprising more than 8-million acres, were awarded by the Mexican government after 1821. They are all near the state’s southern border, with three lying in the San Luis Valley and five sharing territory with New Mexico. Land grants in Colorado and throughout the southwestern United States have fostered shared identity, cultural heritage, and conflict that extend into present-day debates about race, language, ancestry, and land ownership. For these reasons, some of my favorite memories while surveying have been when I am found atop the land described. I come from a mixture of cultures, and I am deeply rooted to the land and all that roams upon it.

One brisk morning in Northern New Mexico, I was out searching for a 30-mile corner monument along the East boundary of the Tierra Amarilla, meaning “Yellow Earth,” Land Grant. The grant extends west of the San Juan Mountains into what is now southwestern Colorado. Searching for this monument meant traversing up a mountain side using some rough BML field calculations to find the brass cap. I knew what I was looking for, a mound of stone with a brass cap which was set in 1932. The land was rocky with small pine trees and sagebrush. My eyes were scanning from left to right as distance on my data collector to the search point was dropping within 100 feet. “Ah-ha!” I thought to myself, “There it is! The mound of stones I was looking for.” I rushed over to it, pretty excited to have found it with little effort. I propped up my rod and receiver on a nearby tree and began to remove the first layer of stones from the top. One layer down, no bras cap. So, I removed a little more and still no brass cap. Then, I started to see some ground and certainly thought I had to be close to exposing the monument. And to my surprise, staring me in the face was a beautiful diamondback rattlesnake. Lucky for me, the temperature was still in the mid-60s and it had not yet consumed enough heat or sunlight to do more than simply open its eyes and look straight at me. Now, I may regret telling you all this, but I am pretty terrified of snakes. But before my flight or fight response kicked in, I had to take a picture! Then I grabbed my rod and backed away ever so slowly, thanking the Heaven’s for the snake not striking me because I was a long way from any civilization. I did eventually find the brass cap that I was looking for, no photo for comparison. This experience, along with others, are great reminders that no matter who the land was granted to, we humans, are the visitors while Mother Nature has no boundaries.” 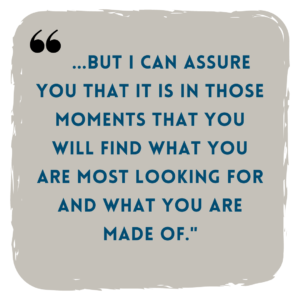 WORDS OF ADVICE
“Stay true to your own internal compass. It may take you off the beaten path but I can assure you that it is in those moments that you will find what you are most looking for and what you are made of. Shattering my big toe the first week into my job post graduating was a huge blow to me mentally and physically. But because of that, I was able to assist in the office and gain a better understanding of what was to be expected of me when returning to the field. I’m more cautious of what and why I do things. With that said, don’t FLIP a manhole lid, s-l-i-d-e it out of the rim and then s-l-i-d-e it back in.”