“Favorite story: Working on a ballfield/rec center construction staking job, we had some interesting clients. They were stern and stubborn,  but one time, the project leads were driving around the site on a gator. Eventually, they started messing around and crashed into a ditch. It took forever to get them out, eventually by one of the loaders on site. From then on, they were given a hard time by all, and everyone sort of relaxed and had a good time.” — Danny Miller, CAD Technician II

“Working on a giant pipeline project in Wyoming for Hiland Crude. It was a long, tough project, but a lot of my pipeline construction and as-built knowledge were gained through this project. Also, it was cool having part of the pipeline go through a military area. Going onto the military site to get clearance, and constantly hearing testing sounds while on the pipeline right-of-way was something else.” —Danny Miller, CAD Technician II 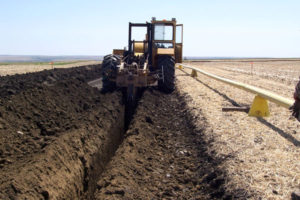 Did You Know…? The Mason-Dixon Line is Actually a Survey Line.

Charles Mason, an assistant astronomer at Greenwich Observatory, and Jeremiah Dixon, an astronomer, mathematician and surveyor, were hired to survey an agreed-upon line to settle a dispute between Pennsylvania and Maryland in 1763. It took four years and cost $75,000 to run the 233-mile line, which later became known as the border between the North and the South, identifiying free vs. slave territories in the US. The Mason-Dixon line was marked by stones every mile and “crownstones” every five miles, using stones shipped from England. The Maryland side is identified with the letter “M” and the Delaware and Pennsylvania sides have the letter “P.” Crownstones have the two coats of arms. Although today, a number of the original stones are missing or buried, many are still visible, sitting on public land and protected by iron cages. Although resurveyed three separate times: in 1849, 1900, and in the 1960s, modern surveys have shown it to be an accurate survey, within a couple of seconds of latitude!

National Surveyors Week’s objective is to raise awareness of the profession through education, media, and public service. With that in mind, Baseline’s surveying team were asked to reflect upon their experiences as surveyors, and answer questions in our “Survey the Surveyors.” Check out what our surveyors had to say each day this week for their survey responses.

2. What led or inspired you to become a surveyor?

“I love to be outside doing physical work, and I also enjoy the historical and research elements of the job.” —Travis Winnicki, Survey Crew Chief

“The challenges of the work, being able to work outdoors, and sometimes working in remote areas.” —Doug Lancaster, LSIT, Survey Project Manager

“It is one thing to see issues on a computer screen. Being in the field and understanding both sides of the operation are crucial to delivering a great product.” —Danny Miller, CAD Technician II