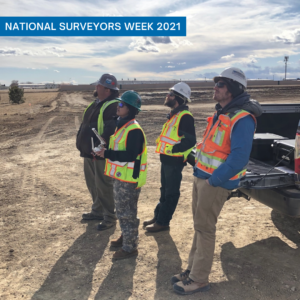 A LONG HISTORY
National Surveyors Week is celebrated annually during the fourth week of March; this year it takes place during March 21st-27th. The event was first created by the American Congress on Surveying and Mapping (ACSM) in February of 1984. Additionally, the 40th President of the United States, Ronald Reagan, signed a Presidential Proclamation that asked citizens to acknowledge professional surveyors and their notable contributions.

Interestingly, there are many famous land surveyors from over the years who have played a vital role in the settling of our country. George Washington, the first recognized land surveyor, may be the most famous of them all. Surveying has made a long-lasting effect on our society and can be attributed for much of America’s success in settling early on. The impact that the profession has made is evident through our country’s history in which Surveying practices are reported as far back as 1400 BC by the Egyptians.

This week is not only a great time to recognize the contributions that surveyors have made, but also a time to raise awareness of the profession through education, media, and public service.

THE IMPORTANCE OF SURVEYING
Surveyors provide the foundation for sound engineering. The precise information they collect regarding the shape and contour of the Earth’s surface is the starting point for planning projects and developing solutions. John McLain, Baseline’s Founder and CEO, is passionate about this foundational role that surveying plays for the quality of our projects and firm overall.

“The quality of information provided by a land surveyor directly affects engineering design and the efficiency of the construction process for residential developments, commercial projects, and public infrastructure improvements. A land surveyor must provide sound base topography as well as accurate boundary information. Before purchasing or selling land, it’s imperative to understand the size and boundaries. Most lending agencies require an ALTA/ACSM survey before committing to financing for commercial and industrial properties. This type of survey accurately depicts boundary configurations, recorded easements, and specifies interior and adjacent improvements affecting the property. Our surveyors at Baseline understand these precise requirements to ensure all regulations are met and your construction project runs smoothly.” —John McLain, PE

BASELINE’S ROOTS
When Baseline Engineering Corporation was first created in 1998, civil design was our expertise. However, Baseline quickly developed as a company and continued offering more services. In 2001, land surveying services were added and 22 years later, it remains a key service we provide as a comprehensive engineering, surveying, and planning firm.

Since the company began, Baseline has grown immensely from its few initial staff members to a 13-person survey team. Spread across four Colorado offices, our survey team provides a range of services including ALTAs, topographic, boundary, and right-of-way surveys, construction staking, FEMA flood elevation certificates, and more. John McLain adds, “today, we are proud of the growth and diversity of our survey department that allows us to meet today’s demands—from boundary and base mapping all the way through construction staking and as-builts.” 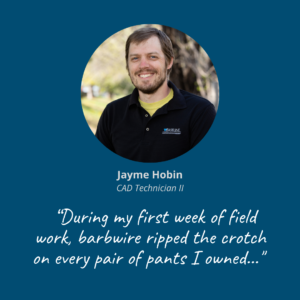 SURVEY THE SURVEYORS
In honor of this week, and the impactful role surveyors have played in our firm’s success, we reached out to members of our survey staff to learn more about the profession. They were asked to reflect upon their experiences as surveyors, and answer the following questions. See what they had to say below:

1. What is something unique, interesting, or important you would share with someone interested in becoming a surveyor?

“With the GPS technology surveying is made too easy compared to the old days (plumb bobs and steel tape). It should never be an excuse for not checking/rechecking your work every day.” —Roland Obering, PE, PLS, Principal Engineer

“A unique or interesting aspect of surveying is the research required to retrace the steps of original surveys that took place hundreds of years ago and the finding that they left. I have seen deeds and documents signed by US presidents such as Ulysses S. Grant and Andrew Johnson, as well as documents signed by Wyatt Earp and Doc Holliday.” —Doug Lancaster, LSIT, Survey Project Manager

“Every day is different, different job site or project, different tasks, every site is unique to itself.” —Aaron Demo, PLS, Survey Division Manager

“You can have a lot of experience or knowledge, but a lot of the time common sense and simplicity are the correct answer to problems.” —Danny Miller, CAD Technician II

“There will always be something to learn and some new career path to explore.” —Jayme Hobin, Junior Party Chief/CAD Technician II

2. Why should someone consider a career as a surveyor?

“Can work outdoors, travel, and challenge themselves. A profession in which you never stop learning.” —Aaron Demo, PLS, Survey Division Manager

“I would say that as a career the survey industry has something for everyone. There are jobs for office people such as research, drafting, processing data, and project management; as for people who prefer to work outdoors there are crew chief, party chief, instrument operator, and drone pilot positions. This work can range from construction staking in the city to shooting a topo in the countryside.” —Jayme Hobin, Junior Party Chief/CAD Technician II

“It’s a great job for someone who enjoys the outdoors and is interested in operating technical equipment.” —Doug Lancaster, LSIT, Survey Project Manager

“It is a pretty high in-demand job with a decent career ladder that also is not that difficult to get into with somewhat quick progression.” —Danny Miller, CAD Technician II

3. What led or inspired you to become a surveyor? 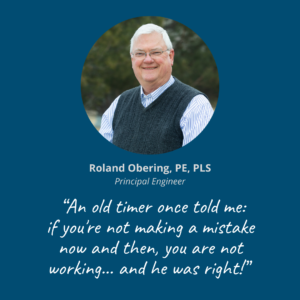 “The challenges of the work, being able to work outdoors, and sometimes working in remote areas.” —Doug Lancaster, LSIT, Survey Project Manager

“It is one thing to see issues on a computer screen. Being in the field and understanding both sides of the operation are crucial to delivering a great product.” —Danny Miller, CAD Technician II