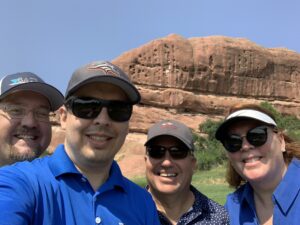 In 1995, Bandimere Speedway developed the award-winning “Race to Read” program for elementary school students. It all started in Jefferson County at Rooney Ranch Elementary School in Lakewood, Colorado; that is where the roots of this organization lie, and has garnered an overwhelming amount of positive feedback from the community in Lakewood sparked the long-term establishment of this learning model. The program has continued to expand and prosper over the past 24 years, and now serves 67 schools and counting. Nearly 230 schools in Colorado have participated since 1996.

The program duration is six-weeks long and its core purpose is to promote literacy through an entertaining and fun race-themed initiative. Every year, “Race to Read” begins in March and ends in May, right before Bandimere Speedway’s season kicks off with the “Night of Fire and Thunder.” Students are provided with take-home reading sheets, which when completed, serve as their access to prizes. Winners are gifted with complimentary tickets to the season-opening event.

In the end, the support from racers and businesses have encouraged the program’s development and emphasized Bandimere Speedway’s commitment to the community, young people, education, and families. As a Bandimere Speedway partner, Baseline Engineering Corporation, through its Baseline for Community (B4C) program, was inspired to get involved as well. Four of our Baseline members had the opportunity to play in a foursome at the Red Rocks Country Club golf course in Morrison and will be sending a team of eight to race the Bandimere Speedway Challenge Cars on August 19.

Each of our Baseline participants reflect on their experience below: 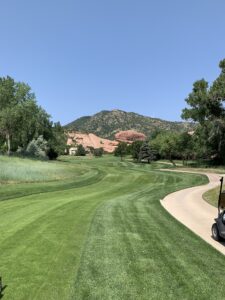 “The Baseline Race to Read foursome was dead last on the scoreboard but first in your hearts. We set out to have fun, avoid sunburn, and walk away injury-free and that mission was accomplished with gusto. The highlight of the day occurred when all four of us ate the largest ice cream sandwiches we had ever seen, without getting brain freeze. That feat alone had us feeling like winners by the end of the day.”
—Ben Thurston, AICP, Planning Division Manager

“The Bandimere golf tournament, in support of the Race to Read program, was a fun event put on by great people. John Bandimere Jr., Bandimere Speedway’s CSO, was there to greet every player and was thankful for all the support of the program. The tournament format was a SHAMBLE – the group plays the best first ball and then their own afterwards. And as John put it, ‘We’re here to play golf! This made the tournament standout from other tournaments which is normally Best Ball.’”
—Michael Lujan, PE, Project Manager

“The golf experience was great! I thoroughly enjoyed golfing with Rhonda, Michael and Ben. It was fun representing Baseline at this event. The comradery was great and I am sure next time we won’t end up in last place!”
—Steve Baggs, PE, Staff Engineer

“I felt like the event was great because I was able to spend time with 3 of my coworkers outside of work and get to know them better. The Bandimere family is a great group of folks to be associated with. Their values and beliefs are something that I can personally align myself with. The event was outstanding— from the course, to the gifts, and the food. Mr. Bandimere and his wife brought us ice cream on the course. Overall, a fun event that made being out of the office for the day well worth it!”
—Rhonda Madsen, PHR, Human Resources Manager

For more information on the Race to Read program, click the following link: https://bandimere.com/race-to-read/